PC cases come in all shapes and sizes, and the search for the perfect one should start with this question: what size do I need?

PC cases are generally available in two form factors; desktop and tower. The former, designed as its name suggests sits horizontally on top of a desk and is ideal where space is limited – these cases often sit neatly beneath a monitor. 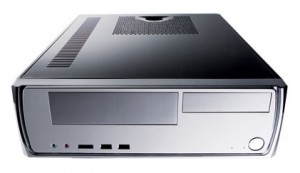 However, due to the size constraints of a desktop chassis, users in need of expandability and a greater number of configuration options will often turn their attention to a tower.

Built to house a myriad of hardware configurations, the tower case is itself available in a variety of shapes and sizes that can be sorted into three core categories; mini-tower, mid-tower and full-tower. The smallest of the lot, the mini-tower, is popular in business environments where space is at a premium and is generally designed to house smaller mini-ITX or micro-ATX motherboards. 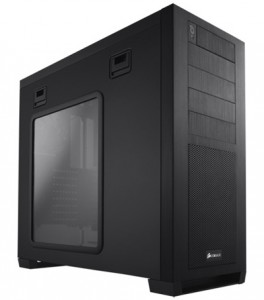 At the top end of the scale, full-tower case can stand at over 2′ (60cm) tall and offer an even greater number of expansion opportunities – in addition to support for niche motherboard form factors such as extended-ATX. These heavyweight solutions fetch a premium and are best suited to users opting for extreme high-end builds. If you’re planning on running multiple graphics cards, for example, size does matter.

Features to look out for

Whether you’ve decided on a small-form-factor or a full-tower, airflow will play an important part in prolonging the life of your PC’s components. Today’s Central Processing Units (CPU) can kick out more than 100W of heat output, and a high-end graphics card (GPU) can easily double that number. Factor in the heat created by mechanical hard-disks, system memory, motherboard and power supply, and your enclosure’s at risk of turning into an oven.

To solve any potential heat issues, most modern PC towers are designed to keep air moving in a set direction across vital system components. 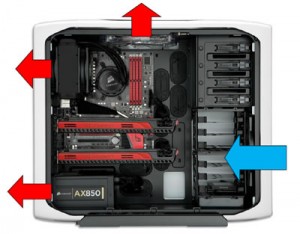 The example above demonstrates how cool air is pulled in via fans at the front of the chassis, and warm air is pushed out through fans at the rear and top. The fan positioning is such that air is drawn across all of the system’s heat-creating components – including the hard-disks, graphics cards, CPU and memory – with few obstructions en route.

Good airflow is vital in high-performance PCs, and buyers should look for a case that carefully considers both component and fan positioning. Will all of your hardware get an uninterrupted supply of air, and will warm air be quickly ejected from inside out?  A minimum requirement for a high-performance case should have at least one intake and one exhaust fan, helping move air from front to back. Obviously the bigger diameter the fan, the bigger volume of air it will push and pull!

I hear you ask “If heat is such an issue, then why not just build a PC with lots of smaller fans? Simply put, Noise.

The moving parts of a PC can be a big distraction, what with the noise of the hard-disks, optical drives, CPU fan, Graphics card fans and the Power Supply Unit (PSU) fans, it is difficult to find a balance between performance and noise. A case with lots of small fans would not necessarily help, so if you want a quieter, more-refined PC then what are your options?

A few things are possible. First and foremost, look for a case with less bigger fans as opposed to lots of smaller ones. Fans with larger blades will not only provide a greater airflow, but they will also spin at a lower speed, reducing noise. Smaller fans, on the other hand, tend to spin in some case twice as fast as their larger cousins in order to move the same volume of air, thus creating more noise. Bear in mind that this can increase even more because not only are the fans spinning twice as fast, there are also 2 or 3 times as many of them. 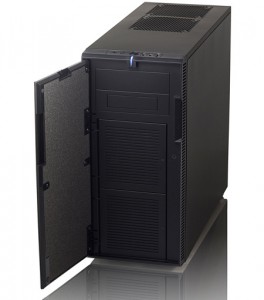 Quieter fans are integral to a near-silent computing experience, but there are enclosures that do more to combat the effects of noise. The above example, comes with noise-absorbing material applied to the side and front panels. Such materials can absorb noise and vibrations before they exit the enclosure, bear in mind such features can cost a lot more.

Do you want to reduce the noise as much as is possible? Consider buying some vibration-absorbing rubber grommets for the hard-disk and optical-disk trays, rubber feet at the bottom of the chassis, and a fan-speed controller. Good ones are able to control all of the fans in the case and monitor temperatures of the air inside the case as well as the CPU, GPU & motherboards.

If you’ve opted for a mid- or full-tower chassis, there’s a good chance you’ll be wanting flexibility for upgrading to newer components when they become available or affordable. 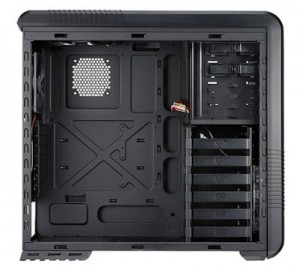 A well-equipped chassis, such as the one above, should have a couple of 5.25in external drive-bays and at least half-a-dozen internal hard-disk bays that support both 3.5in and 2.5in drives. You’ll want to double-check that if you plan on using 2.5in solid-state drives (SSD).

The number of PCI expansion slots at the rear may seem like overkill for a mid-range build, but having seven or more slots leaves room for future graphics upgrades, which can be useful if you are considering a future upgrade to a second GPU.

Your airflow requirements should also be considered. While a cases pre-installed fans may be adequate for your original pc build, future upgrades may require more airflow. Check to ensure your case has spare fan-slots, however if  you’re considering an extreme PC build then choose a case that supports liquid-cooling. When doing so, consider the space required for a good-sized radiator and whether or not there are cutouts for the tubing?

Once you’ve picked out your perfect PC case, remember you’ve then got to build into it! Ensuring your case has a couple of the below-listed, user-friendly features can help simplify the build process: